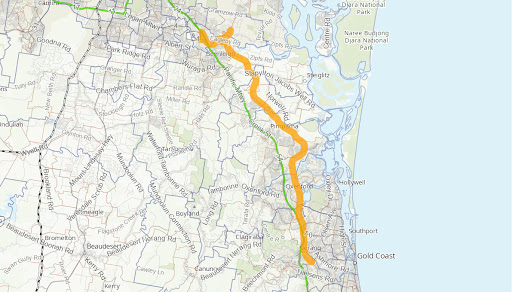 Construction on the multi-million Coomera Connector is set to commence on Stage 1 North later this year as the Gold Coast witnesses a surge in growth and house supplies drop to critical lows.

The Coomera Connector is referred to as the second M1, spanning across the north-south corridor between Loganholme and Nerang on the east side.

The connector is set to hold up to 6 traffic lanes together with a provision for public transport in a bid to ease peak hour traffic as the Gold Coast booms amid lockdowns influencing a surge of interstate migration.

As the population growth continues to grow, the infrastructure upgrades will support residential communities, businesses and nearby developments bringing local road connections to residents.
Stage 1 will have a positive impact on commuters providing reduced trips on the M1, proving this alternative route between Coomera and Nerang will not only see less traffic on the M1, but will also provide more convenience for local residents.
Stage 1 of the connector is set to see infrastructure and road upgrades between Coomera and Nerang, commencing construction from mid 2021. From 2026, stages between Loganholme and Coomera progress.

Nearby, construction is set to commence on the first stages of the stunning $650 million Serenity 4212 project in Helensvale following a high interest sales campaign.

The new highway upgrades will be interchanging at Loganholme and Nerang–Broadbeach Road, extending the road for 45km between the Logan Motorway and Pacific Motorway, easing commuting residents’ everyday trips.

Local residents will also be set to benefit from connectivity heading north from the Coomera Connector at Eagleby to the intersection of Beenleigh–Redland Bay Road and Mount Cotton Road, at Carbrook.

The Coomera Connector is also set to feature a shared path for walking and bike riding, supporting the lifestyle elements on offer at Serenity 4212.